Fossils in Hunstanton Did you know..

The Famous Red and White Cliffs of Hunstanton are visited by hundreds each year simply to see this spectacular natural geological feature. The Red Rock and White Lower Chalk is rich in fossils including echinoids, fish, shark, bivalves and brachiopods, ammonites and more.

Important safety notes. Often at Hunstanton during winter months it is easy to be cut off from the tide. During bird nesting season, rocks can crumble from the high cliffs. Stay away from the cliff edge during these periods. Common sense when collecting at all locations should be used and knowledge of tide times should always be noted. The main issue one should be aware of is the tide and falling rocks.

Smuggling in The Wash  Did you know..

If you've ever spent time delving into the local history of a coastal area, you'll sooner or later have come across notes to the effect that 'everybody in these parts is a smuggler'!

Despite the stereotype of the sailor-smuggler, smuggling operations employed far more men on land than they did at sea. If convoys of wagons and horses rolling along these roads attracted too much attention, old superstitions provided plenty of ways of discouraging further interest: Old Shuck the ghost dog is a persistent Norfolk legend that the smugglers exploited. Shuck is an enormous black dog with one glowing eye, and fiery breath. Anyone who sees Old Shuck is sure to die within a twelve month. Norfolk smugglers took advantage of the gullibility of the villagers and tied a lantern round the neck of a black ram, sending it running off to frighten nosey locals when a smugglers run was due.

The antagonism between the Norfolk smugglers and their opponents in the revenue services ran much deeper than punch-ups on the beach and harmless tricks involving horses. A visit to the church of St Mary the Virgin at Old Hunstanton illustrates this. In the graveyard are buried two soldiers who were killed in battles with smugglers. The epitaphs read:

‘Here lie the mangled remains of poor William Green, an Honest Officer of the Government, who in the faithful discharge of his duty was inhumanely murdered by a gang of Smugglers in this Parish, September 27th, 1784’.

Two smugglers were caught in the battle that killed Webb, and when brought to trial there was, according to contemporary accounts 'no doubt' of their guilt. Nevertheless, against all the evidence, a jury found them innocent. The prosecuting counsel demanded and got a new trial, but again the new jury displayed its sympathy with the smugglers and returned a second not guilty verdict.

Seahenge Ancient Circle Did you know..

Seahenge is a unique display of a Bronze Age wood circle.

Discovered in 1998, it was carefully moved from its site at Holme-next-the-Sea, just along the coastline from Old Hunstanton, a year after being discovered. 55 oak posts in a circle with a central stump - sat unnoticed and undisturbed off the Norfolk coast for almost 4,000 years.

Archaeologists at the Bronze Age Centre, believe between 50 and 80 people may have helped build the circle, possibly to mark the death of an important individual.

Seahenge became exposed at low tides after the peat dune covering it was swept away by winter storms.

Hunstanton Lighthouse  Did you know..

Blazing beacons and lanterns warned ships of dangerous sandbanks in The Wash centuries before the first lighthouse in 1666.The present lighthouse on the Hunstanton cliffs was built in 1844 and ceased operations in 1921 when it was first replaced by a lightship, then by a remote control fog buoy. It is now a holiday home.

Hunstanton Pier  Did you know..

Designed by J.W. Wilson, this 830 foot pier opened on Easter Sunday 1870. Sadly on 11th January 1978, a storm destroyed most of the pier and a small section at the end was removed by the council some weeks later. The shoreward end amusement arcade survived, along with one set of piles, to remind people of what had arguably been East Anglia's finest pier.

Fancy a holiday?  Did you know..

Searles Leisure Resort in Hunstanton is a family resort that has offered holidays in 'Sunny Hunny' on the Norfolk coast for over 85 years.

Four generations of the Searle family have grown this holiday resort from a small donkey field offering caravan pitches for a bag of potatoes into the fully entertaining 5 star family resort it is today.

In February 2018 Searles was awarded 'Winner' for Best Holiday Park in Norfolk & Suffolk by the EDP Hoseasons Norfolk & Suffolk Tourism Awards, this was followed in November when Searles were delighted to learn that they had been awarded 'Winner' for Holiday Park of the Year by the AA Camping & Caravanning Awards. They also still continue to maintain their 5 Star rating from VisitEngland. 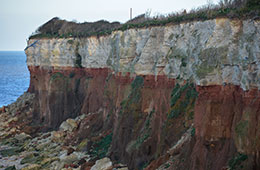 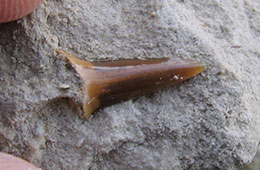 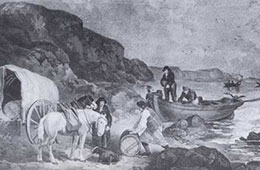 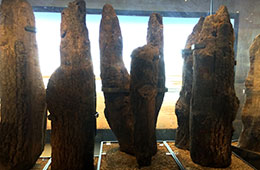 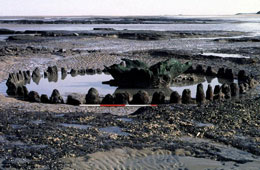 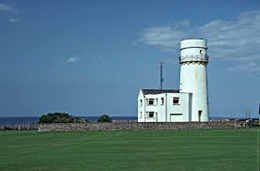 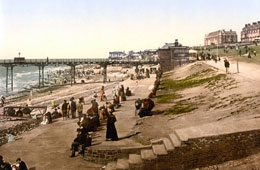