This coast is steeped in history as you will discover whilst listening to
the narrative on our Guided Tours. Binoculars and information leaflets are
also provided to share.

A 30 minute Coastal cruise on one of our two famous Wash
Monster amphibious vessels, out of The Wash and into the
North Sea, viewing the cliffs, lighthouse and Old Hunstanton.

Old Hunstanton was a favoured landing place of smugglers and was often a prime target for the 'King's Men' who patrolled this stretch of coastline in the 18th Century! In the graveyard of St Mary the Virgin at Old Hunstanton are buried two soldiers who were killed in battles with smugglers.

30 minute tour on one of our two Wash Monster amphibious vessels, includes viewing the cliffs, the lighthouse and wreck of The Sheraton built in 1907 grounded in 1947.  Subject to tidal conditions

The Steam Trawler Sheraton was built in 1907 for fishing and was later used for boom defence work during World War I and served as a patrol vessel in WWII, for which she was fitted with a six pounder gun. During a gale in 1947 she broke free of her mooring and drifted onto the beach at Hunstanton. Much of the Sheraton was salvaged but the bottom of the hull remains on the beach in the intertidal zone.

20 minute shoreline coastal tour, to capture panoramic views of Hunstanton and The Wash, on one of our two Wash Monster amphibious vessels.

The iconic striped cliffs of Hunstanton were recognised as one of the UK's top geological sites by the Geological Society of London in 2014. The top part of the cliff is made of white chalk from the Upper Cretaceous era. Below this is a band of a limestone called Red Chalk from the Lower Cretaceous era formed over a period of 15 million years. Beneath that is Carrstone - which is a red-brown colour.

Visit one of the Sandbanks of the Wash on our magnificent Wash Monster where you can walk down the bow ramp and explore this unique environment.

Tour 6:Look out for our 1 hour special at selected times, in Wizzy exploring The Wash

The Wash is a long stretch of sand and low cliffs , with exposed salting’s and tidal inlets. It was here in 1216 that King John's treasure train got trapped by the tide in quicksand, and disappeared below the seas of the Wash. It has never been recovered! 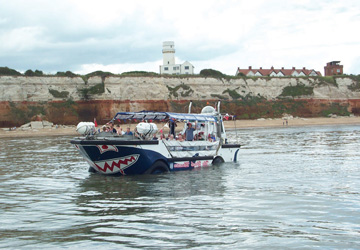 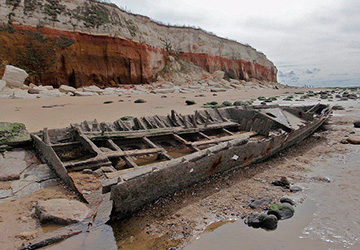 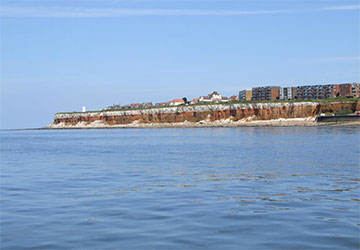 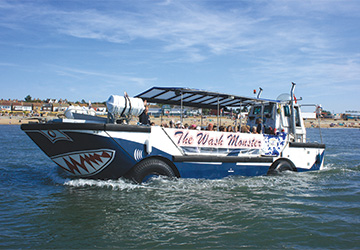 New Guidelines: Pre-Booking Required. We will require all names of group along with address and contact telephone numbers.
Board from the Sea Tours Kiosk, Central Promenade, Hunstanton.