Established in 1929 Geoffrey Searle was passionate about the sea. His love for boats led him into building his first speedboat and going into partnership with an old school friend, Jack Tibbett. Their first speedboat named ‘Tigress’ soon became a popular attraction and Searles Sea Tours was born.

The outbreak of hostilities in 1939 brought a sudden end to holidays in Hunstanton until peace returned in 1945, where Geoffrey would set about reviving his sea trips. Geoffrey’s right hand man in those days was Stephen Grange who would set up price boards for the sea trips and rally the passengers! ‘Skit’ as he was affectionately called, liked to wear a peaked cap and be known as ‘Captain Grange’. It was a standing joke, however, as he was frightened of the sea and had never been on the water!

In 1946 Geoffrey became interested in the amphibious landing craft, officially known as DUKW or as more commonly known ‘Ducks’. DUKWs featured prominently in the D Day landings moving between land and water. Geoffrey could see that DUKWs could be a big attraction for the holidaymakers if only he could persuade the War Department to sell him a couple! They needed a lot of persuasion but eventually they agreed but only on the strict understanding that if hostilities were to break out, they would take them back! Eventually the DUKWs were delivered and after a few modifications adapting them to carry passengers to safety regulations, Geoffrey began his next venture of Sea Tours and it is thought that these DUKWs were the only ones being commercially used at sea. 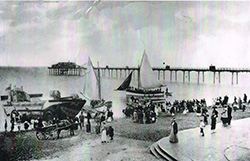 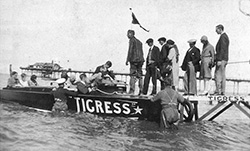 In 1976, the gaping jaws from a killer shark speeding its way through the waves could be seen every day during the summer. But local residents and holiday makers were not alarmed, as this particular shark was quite harmless. Geoffrey and youngest son William had painted a shark on to a speedboat to run pleasure trips up and down the coast several times a day. Fondly called Jawz!

Sadly in 1981 Geoffrey Searle died and youngest son William took over. William had inherited his father’s love of the sea and would be fishing during winter months for cod while summer months he would run sea trips using the DUKW or his wooden hulled craft named Sea Lion LN300 taking holiday makers out to the sandbanks to view the local seals.

In 1991 William replaced the original Sealion for a twin hulled catamaran, carrying some 60 passengers, offering a two hour, 14 mile sea tour to the Seal Islands.

In 2001 Wiley The Wash Monster was welcomed to the Searles Sea Tours fleet providing unique coastal tours. Officially known as a LARCV, (Lighter Amphibious Resupply Cargo vessel) this magnificent vehicle was originally designed for use by American Marines in Vietnam as a landing craft. The original shark’s head was painted on by U.S. Marines during the Far East conflict. The LARC can travel up to 13mph on sand and 8 knots on water.

In 2013, Wiley was to get a mate! Wizzy The Wash Monster II, another LARC vessel joined Wiley at Searles Sea Tours and would become the first amphibious vessel providing Seal Safaris. Wizzy also made history by crossing The Wash on Friday 23rd August 2013.

William Searle, his wife Liz, daughters Aimee, Laura and Rachel plus friends and crew made this historic first car/passenger ferry crossing over the Wash to Skegness aboard "Wizzy" leaving from Sea Tours Reception on Hunstanton Central Promenade at 9.00am arriving at Skegness beach around 11.00am taking 1 hour 57 minutes there and 2 hours 5 minutes back.

Searles Sea Tours has been voted No.1 Attraction for Things to do in Hunstanton for four consecutive years by Trip Advisor, retaining their No.1 crown in 2015, 2016, 2017 & 2018. In 2017 they also received an Excellence Award from Trip Advisor for their fantastic reviews.

Today if you look out across the Hunstanton coastline, a regular sight will be these 2 famous Wash Monsters and Captain Willie and his crew, continuing in his father’s legacy of 90 years, providing unique and exciting Seal Safaris and Coastal Tours to holiday makers, local residents and visitors of all ages.

Be sure you make Sea Tours your first port of call!